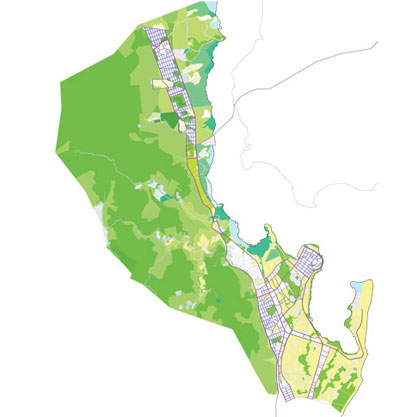 The 2013 super typhoon Yolanda devastated Tacloban, a city of 220.000 inhabitants, uprooting its most fragile coastal communities. In response, authorities initiated the phased relocation of 90.000 people to safer grounds 10 to 20 kilometers north of the city. Resilient Tacloban is based on a strategy meant to give an answer to important practical questions: how to keep the city safe, or at least as safe as possible? How to keep it prosperous, and facilitate economical growth? And not to forget how to implement the policies to execute the plan?

Tacloban, like many other cities in the Philippines, is exposed to multiple natural hazards such as earthquakes, tsunami’s, storm surges, flooding, and landslides. Therefore the impact zones of multiple natural hazards are spatially incorporated into the urban DNA of Tacloban. Our proposal is to prioritize development in safe areas through investing in public infrastructures where growth is most desired and safe. In the areas more prone to flooding and landslides low dense and temporal uses could be allowed for land uses with a low vulnerability.
Both formal and informal developments in Tacloban lack coherence and structure. The organically developing city is difficult to govern, urban planning principles difficult to enforce. A clear and communicative spatial plan can be an effective tool in overcoming the issues above and making the city more efficiently governable. City grid layouts, referring to traditional cities in the Philippines, help to create a physically rational, mixed-use development with clear distinction between public and private space, where street life is facilitated with walkable blocks.

A dense street network with high connectivity and affordable mobility in a city allows citizens to interact, maintain social and economic activity. In Tacloban, this entails the reintroduction of a hierarchy between regional, urban and neighborhood networks to relieve pressure on the main roads, and facilitation of inclusive mobility citywide.

This project was developed by the Tacloban team of UN Urban Labs, consisting of Krill-orca, Mars Architects, Studio MAKS, and Rademacher-DeVries Architects. UN Urban Labs is a global network of planning & design teams commissioned by UN-Habitat to collaborate with local planners and administrators to develop urban strategies. This was funded by the Dutch Creative Industries Fund.